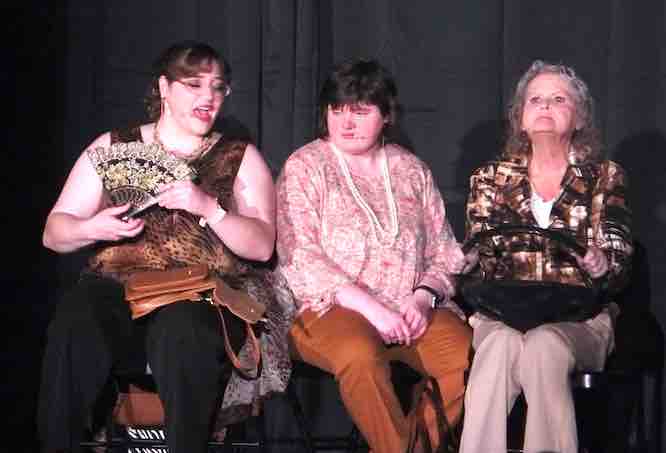 Local coffee theater troupe Off Stage Productions presents “Mama Won’t Fly” for your viewing and dining pleasure this spring. I had the chance to see the dress rehearsal of this production last night.

The trio of Jessie Jones, Nicholas Hope and Jamie Wooten quickly became the premier writers of dinner theater scripts for small community productions. Off Stage Productions has featured several of their works in the past, each crazier than the last. It looks like Jones, Hope, and Wooten explore different aspects of dinner theater production with each of their plays. With “Mama Won’t Fly”, they use a “minimalist” approach to stage setup – few stage props and little sideways or back and forth movement of players. At first glance, this may seem like a bland concept for a stage production. However, as part of a road trip across the country taking place in a variety of vehicles, it works!

The story revolves around a trio of ladies who prepare for the wedding of one of them on a California beach – the bride-to-be and her future mother-in-law and sister-in-law. Kecia Pontius stars as Savannah Honeycutt, a talkative southerner and flamboyant sister of the groom, tasked with getting her cantankerous mother Norleen Sprunt (Dolores Foreman) from the Deep South to California in four days. The main problem is that mom won’t fly! After a bit of a verbal fight, Mom agrees to allow her old Buick to be used for the impending cross-country drive. Enter Hayley Quinn (Courtney Wendel), the blushing bride-to-be, who sees the long drive as a perfect way to get to know her future in-laws better during the four-day trip. Thus begins a series of misadventures, as the mismatched trio traverse Texas, New Mexico, Nevada, and finally the beach in Southern California. Along the way, they encounter a variety of quirky locals who turn the trip into a wild adventure reminiscent of Bob Hope-Bing Crosby’s “Road” movies from the 1940s to 1950s.

“Mama Won’t Fly” brings in two Off Stage veterans (Pontius and Foreman) to play the lead roles, while newcomer Wendel provides third foil for the other leads. All are up to the task, as the interaction between the three different characters provides near-constant amusement and occasional laughs. Pontius and Foreman play their characters appropriately but lovingly gruff and controversial, as adult children and aging parents often are. Meanwhile, Wendel plays his equally anxious young bride-to-be to do and say the right things, desperate to get off on the right foot with his future in-laws. A special note: Anyone who has played “car games” on long road trips will find this band’s portrayal of them on that endless drive hilarious!

Another aspect of stage production explored by Jones-Hope-Wooten writers in “Mama Won’t Fly” is that the supporting actors all play multiple characters in this cross-country play. It was quite a challenge for the costume designer for this production, but Julie Lang pulled it off very well. Veteran Terri Stevens plays four distinct characters on the road trip and, as always, played each one solidly. Her interaction as “Tanya” with Foreman’s “Mama” in an early scene is remarkable, and their stalemate for a while seems destined to end their relationship with a bang!

Longtime offstage player Ed Eichler also plays a quad of characters. Ed is rock solid, especially as a supporting actor. He once again shines in his roles, particularly as a confused bridegroom about to attend a sordid wedding in Las Vegas. Similarly, veteran Amy McConn is very funny in her roles. In what I thought might be the funniest scene of the entire production, she plays the goofy curator of the “National Museum of Fundamental Underwear.” Several of the exhibits in this museum feature “over-the-shoulder rock racks”. I may never be able to hike the Rockies from the same perspective again!

Veteran Off Stage performer Mary Weisman also plays a trio of characters, all performed with her inimitable comedic style. I felt Mary’s portrayal of a “showgirl/marriage chapel minister” combination was one of the most offbeat characters I’ve seen in many years. I hope you also find Mary’s character ‘enlightening’. Chris Burkheimer was a revelation to me. I enjoyed his first three roles…then we came to his portrayal of a caffeinated truck driver! Chris was hilarious as a wide-eyed trucker who had spent far too many consecutive hours behind the wheel. I’m sure Off Stage Productions welcomes Chris to the cast!

Finally, there’s a surprise appearance at the end of production as the long-lost “Spud.” I can’t tell you who it is; that would spoil the surprise. But it looks like one of the old veterans has been dragged into the role.

Ed Eichler makes his directorial debut with this production, while Julie Lang is in charge of wardrobe and Emily Smith is the stage manager.