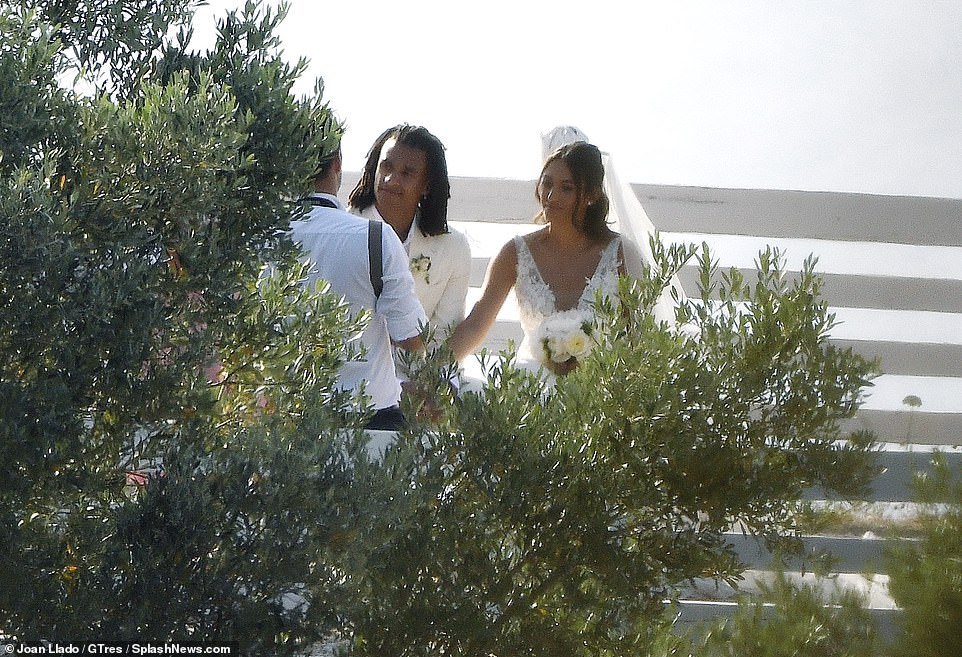 Manchester City’s Nathan Ake has tied the knot with his teenage sweetheart, Kaylee Ramman, in a glamorous ceremony on the island of Mallorca.

The 27-year-old Dutch defender was pictured with his new bride, also 27, at the exclusive wedding venue on Son Marroig beach in northwest Mallorca this morning.

A host of big-name players – including many from Ake’s native Holland – donned their sharpest suits to celebrate, with Liverpool’s Virgil Van Dijk, Manchester United’s Donny van de Beek and PSG’s Georginio Wijnaldum all in attendance – with European WAGS also putting on a stylish display in summer attire.

Several of Ake’s teammates, including Kevin de Bruyne, Jack Grealish and Raheem Sterling, are also believed to have made the move, alongside manager Pep Guardiola.

Before walking down the sunny driveway, footballer Ake was seen being led to the site, looking a little nervous as he prepared to say ‘yes’.

Designer Kaylee, 27, and Nathan have been dating since they were teenagers… and tied the knot on the Balearic island over the weekend

After the UEFA Nations League matches and the end of the football season, the happy couple were joined by Ake’s past and present teammates.

Former Manchester United and now Watford star Josh King from Norway was also among the guests.

Liverpool star Virgil Van Dijk, third from left in the top row, looked relaxed in the Spanish sunshine as he partied with other guests to mark his compatriot’s big day .

Guests arrived, many opting for hues of lemon, lime and green, by coach to Son Marroig this morning. Right: Glamorous attendees head to the Mallorca resort ahead of the wedding

He may have been a fierce rival on the pitch this season, but Liverpool star Virgil Van Dijk looked relaxed in the Spanish sunshine as he partied with guests to mark his compatriot’s big day .

Designer Kaylee, 27, and Nathan have been dating since they were teenagers. On her Instagram page, the Dutch WAG posted photos from her time in Mallorca, sharing a series of wedding-related emojis.

The newlywed also posted photos from a fun bachelorette party, reportedly held in the UK in recent weeks, where she sported a ‘bride-to-be’ veil and glasses.

From photos of wedding guests attending the couple’s special day, the outfits seem to match Mallorca’s beautiful weather, with many opting for shades of yellow or blue.

His past and present teammates flew to Mallorca to help Ake and his new wife celebrate. Philippe Sandler, who plays with Ake at the Manchester club, wore a linen ensemble to combat the Spanish heat

Former Manchester United and now Watford star Josh King, from Norway, was also among the guests

A wedding guest in an elegant green satin sleeveless cat suit and wedge heels, carrying a Zara bag, walks towards the backdrop

The property is known for its breathtaking views and beautiful gardens, making it a popular choice for well-heeled couples

The Son Marroig rural estate is the former mansion of Archduke Luis Salvado and has become a wedding venue of choice for many well-heeled couples.

The property, known for its breathtaking views and beautiful gardens, features a Carrara marble pavilion, which overlooks the ocean – and is the perfect place to say “yes”.