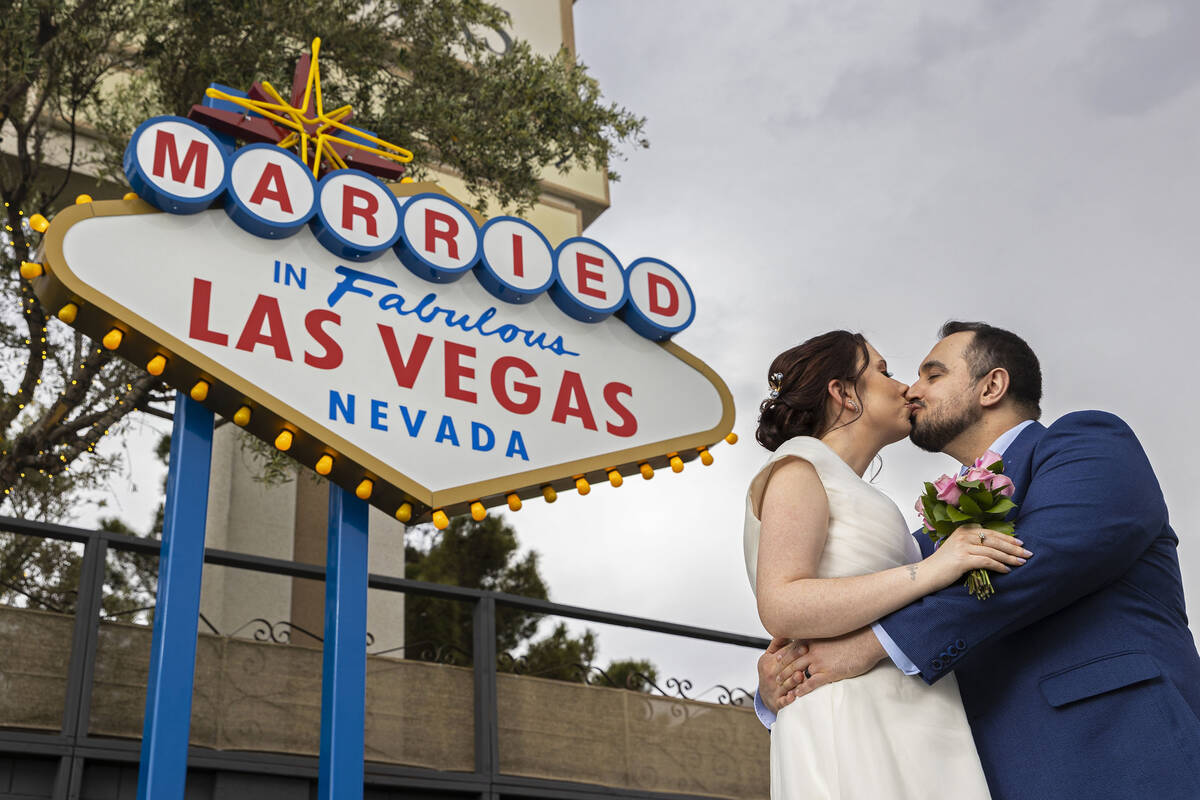 The bride and groom often pose for a photo in front of the historic “Welcome to Fabulous Las Vegas” sign. Now, years of romantic getaways to the wedding capital of the world have led to at least one chapel recreating its own sign, like the half-size version, “Married in Fabulous Las Vegas,” unveiled this week at the Chapel of Flowers.

The downtown Las Vegas chapel had the stylized vintage sign created as a tribute to the 5 million couples who have married in Las Vegas, according to a statement from the downtown wedding chapel.

“Our new ‘Married in Las Vegas’ sign is a symbol of love,” Chapel of the Flowers CEO Donne Kerestic said in a statement. “We hope our photo location will be a popular destination for all locals and tourists visiting downtown Las Vegas.”

The chapel sign is just the latest addition to Las Vegas’ legacy as a wedding destination. It took decades for Southern Nevada to gain global prominence in the wedding industry. Now that history is celebrated in a new exhibit, sponsored by the Clark County Clerk’s Office, that shines a light on the wedding industry.

The first known reference to Las Vegas as the “marriage capital of the world” appeared in a 1953 London Daily Herald article, highlighting the unique industry and cementing its global reach.

He even mentioned a trend that still exists today: all-inclusive wedding planning.

“For £9 they will not only provide organ music and witnesses, but also orchids for the bride and a photographer who will send snaps to your ‘hometown newspaper’ with a company note,” says the item.

Clark County Clerk Lynn Marie Goya worked with Cynthia Ammerman, historian and curator, and Laura Covington of Bridal Spectacular, to set up the exhibit in the Clark County Government Center rotunda. Visitors can peruse posters in the lobby showing quirky family homes turned 1930s chapels, facts about each decade, a celebrity wedding slideshow, and examples of vintage wedding dresses from the last century.

“It’s a legacy industry that really helped create Las Vegas,” Goya said. “Gambling, which was illegal in many states, easy divorce and easy marriage are really the basic services that made Las Vegas, Las Vegas.”

Nevada’s speedy marriages and divorces began in the 1930s when the state scrapped blood test and waiting period requirements, luring Californians and others to the desert for their nuptials.

The popularity continued into the 1940s, when World War II prompted more young couples to marry before being drafted. About 20,000 marriages took place in 1942 in Clark County, an increase of 145 from the previous year, according to the county.

Nowadays, the annual rate is significantly higher. The Marriage License Bureau issued more than 77,000 licenses in 2021, according to the Registrar’s Office. Goya said the department is on track to lay off 80,000 couples this year.

Clark County issued its 5 millionth marriage license in February, the same week of 2/22/22, or “Twosday”, a popular wedding date and the fourth highest number of couples married on a special date with 2 341 couples getting married, it said.

The exhibit is part of a year-long campaign by the county and the Las Vegas Marriage Chamber of Commerce to highlight the industry’s impact on Nevada and the millions of couples who have brought their stories to life. love in Vegas.

The industry hopes to capitalize on the growing popularity of Vegas weddings with more innovations, like better technology and live streaming, custom cocktails and trendy decor.

“Las Vegas has an incredibly innovative industry,” Goya said. “What’s been really fun is seeing the community get excited about weddings again. There’s a new push, a new vibrancy.

Curmudgeons may say that 50% of American marriages end in divorce – another quick service offered that was key to early Nevada history. But Goya argued that it’s more important to celebrate memories made of love and encouraged couples to share their stories online.

“Not all stories have a happy ending,” she said. “Obviously you either get divorced or you die eventually. But it’s not about the end, it’s still a love story. You have kids of them. You have generations of them. Vegas is just very happy to be part of this story because that’s life.

McKenna Ross is a corps member of Report for America, a national service program that places reporters in local newsrooms. Contact her at [email protected] To follow @mckenna_ross_ on Twitter.