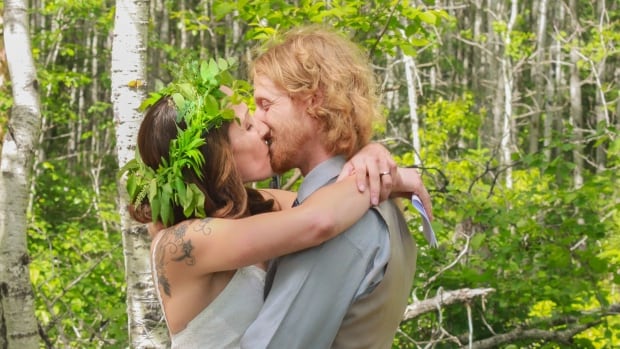 In the summer of 2018, Cassandra Stinn got married in a dress made by a friend, made with fabric she found at a sale. Guests gulped down food they brought themselves – potluck style – using dishes they brought from home.

As co-founders of Saskatoon’s Waste Not YXE, Stinn and her husband, Jesse Selkirk, aim to reduce waste in their daily lives, and their wedding was no exception.

“I think the culture of one-on-one marriage is wasteful,” Stinn said. “When you’re engaged and you go to friends’ weddings, you see all these little things that you want to incorporate, and every wedding gets bigger and bigger. Suddenly there’s a million favors and a dance floor confetti and balloons everywhere.”

The carbon footprint of weddings can be as heavy as their price. According to a student sustainability group at Stanford Universitythe average wedding clock accounts for over 56 tons of carbon emissions, a number that includes factors such as location, transportation, wedding dress and food.

Stinn and Selkirk were married at Ness Creek, a multi-service site west of Prince Albert National Park in Saskatchewan. In their invitations, they told guests that reducing waste was important to them and asked guests to avoid disposable products. The reception decor involved lots of compostable and recycled items, like burlap and pinecones.

Ness Creek site manager Gordon Olson said they are striving to be carbon neutral, with initiatives including composting, gardening and powering some of their operations with energy solar.

“The underlying principle of how we operate is that we try to be sensitive to our ecological footprint. We believe that we should reuse and reuse as much as possible,” Olson said.

Couples can choose from outdoor and indoor options, including the on-site lobby, which provides real dishes, glassware, and cutlery to cut down on disposables. Composting and recycling options are also available on-site, and meals are served through a partnership with a local caterer. Many ingredients, such as fish and wild rice, are sourced from local suppliers.

“The natural setting is really important,” Olson said. “A lot of people who get married here are related to the Ness Creek Music Festival, and I find they are already interested in any type of green option they might have. But I think it’s a growing trend.”

“I think the pandemic has made it easier for people who want smaller weddings to feel confident about planning [events that are] small and durable,” Shanks said.

For couples looking to reduce the carbon footprint of their wedding, Shanks shared some tips:

Stinn advised to keep it simple and carefully weigh the amount of stuff you buy.

“If you just go to Facebook Marketplace and type in ‘wedding,’ you’ll find everything you need, but you can also see how much stuff you really don’t need,” he said. she stated. “If you only get it for a day, then it’s kind of like, yuck!”

Selkirk echoes that sentiment, adding that by doing less, couples aren’t giving up.

“A lot of people who grew up in a consumerist culture think of having less and using less as a sacrifice, but that’s not the way it is at all. It’s actually a better, more fulfilling, and more satisfying way to live.”

From choosing the right venue to planning a weather-appropriate food menu, here are 6 tips