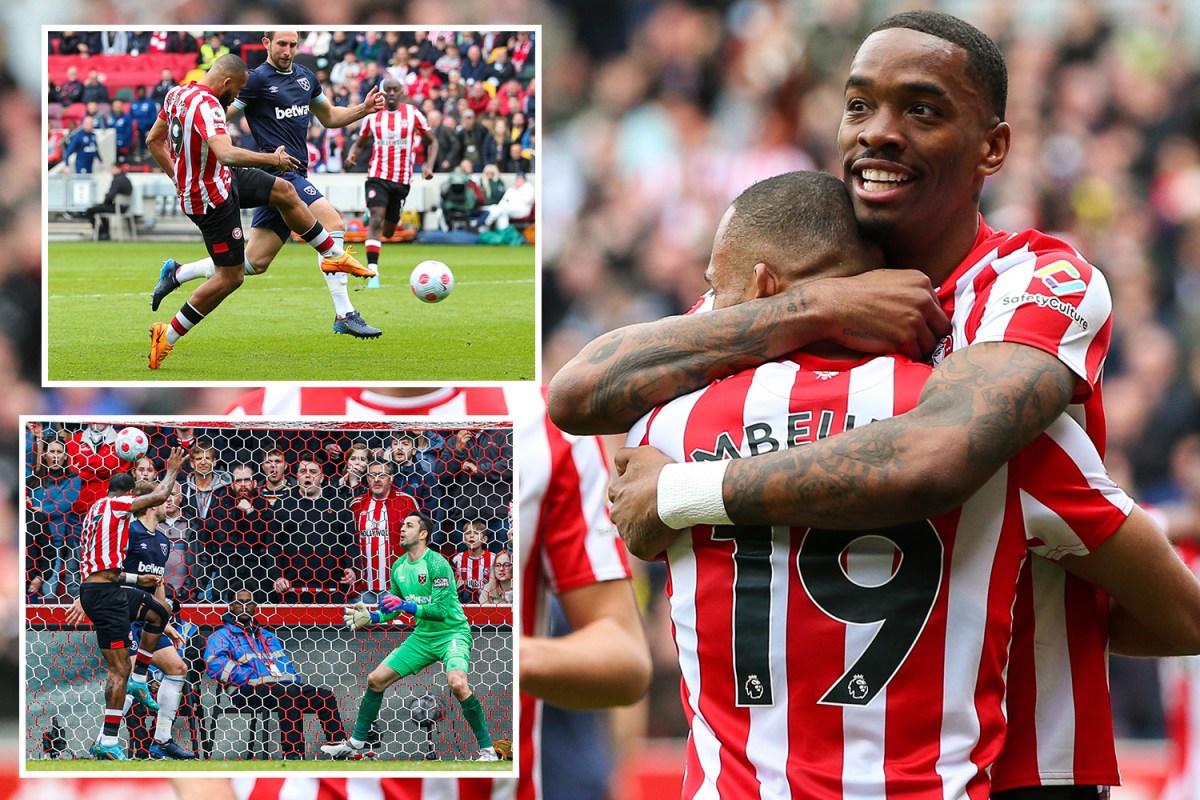 BRYAN MBEUMO has proven he’s not always the bridesmaid, never the bride.

The French powerhouse, 22, scored his first Premier League goal from open play in SIX MONTHS to put the Bees in control.

He also played a part in Ivan Toney’s header which lifted the club to a precious 12 points from third bottom Burnley and moved them closer to safety.

Mbeumo is clearly making life hell for the Hammers, with his last goal from open play in the league also against them in October.

He’s been under the radar this season, only being on target three times in the league before yesterday.

And he was left frustrated after not scoring any of the club’s historic four goals against Chelsea but providing two assists last time out.

Now it’s up to him to shine.

It’s no surprise that Frank recently made a point of breaking away from the usual love of Christian Eriksen to acknowledge the contribution of Mbeumo and his attacking partner Toney.

Gareth Southagte will surely be on the fan now as Toney’s heroics took him level with Harry Kane, both on 12, as the most goals scored by an England player in the Prem this term.

Most read in the Premier League

Their frustration with Aaron Cresswell’s red card which led to Moussa Dembele being caught giving his teammates a wink after he threw himself to the ground to have him sent off bubbled up in this game.

And Rico Henry woke them up in the blink of an eye with a blistering run from the start.

He then threw a threatening cross which Kurt Zouma did well to fend off before anyone could land a crucial touch.

Christian Norgaard then threw in another inviting delivery, but no one rose high enough to hang on to it.

Hammers tough guy Craig Dawson had a nosebleed for an earlier header with Yoane Wissa.

His schnoz, who was also bleeding late against Lyon, saw more injuries last week than the Hammers had chances yesterday afternoon.

The Bees continued to build and Wissa fired a perfect cross but Mbeumo headed straight for Lukasz Fabianski.

His desperation to hit the net was visible throughout the first half.

The striker pricked Fabianski’s hands with a raspy effort but he then sabotaged a series of wild shots well over the bar.

Kurt Zouma, still being roasted by away fans for his cat-kick shame, was sent off just before the half-hour mark as he was still feeling the effects of an earlier Norgaard tackle.

Issa Diop entered the fray but made the sleepy Hammers even more slippery before the break.

Mbeumo, Toney and Christian Eriksen hit the ball like pinball before the Danish star fired a straight shot at Fabianski.

The tame effort was uncharacteristic for the former Spurs schemer, but it still can’t hurt the eyes of Brentford fans who are still madly in love with their arrival on Deadline Day.

And he was determined to put things right with a sparkling free-kick on the stroke of half that Vladimir Coufal nearly nodded into his own net.

The visitors still seemed asleep after the restart and they had to pay.

A fast throw from Kristoffer Ajer was thrown by Toney which Mbeumo leaped over and sparked a raspy, low finish into the net in the 47th minute.

Said Benrahma has returned to his old playground in place of Manuel Lanzini who was making his first start since his terrifying car accident last week.

Bee fans will never forget some of the magic moments the Algerian winger gave them and he came on a chorus of chants of ‘Said Benrahma, he wants to come home’.

You couldn’t exactly blame him after another tasteless Hammers half.

Eriksen then grabbed Wissa who broke free, but Lanzini choked him out before he could shoot.

By this point Brentford had an iron grip on the game – and of course Toney stepped up to drive the final nail in the visitor’s coffin.

A peach from a cross from Henry fell on Mbeumo, whose reduction found Toney and he did the rest as he passed Fabianski in the 64th minute.